Leader of the Plateau Youth G17 group, Mr. Dachung Bagos has challenged the Plateau State Independent Electoral Commission (PLASIEC) to be transparent, accountable and demonstrate probity in its preparation towards the forthcoming Local Government Elections in Plateau State.

Addressing Journalists after he temporarily shelved his proposed visit to PLASIEC Office to get firsthand information concerning the Local Government Elections in the State slated for 17th February, 2017, Bagos hoped that the polls will be free, fair, credible and acceptable.

Bagos said the purpose of his visit which was interpreted as a protest was to engage PLASIEC constructively to know their level of preparedness to conduct elections that will be free, fair, credible and acceptable.

Bagos expressed shock that "some miscreants" were sent to attack him at PLASIEC Office.

He said he is a law-abiding citizen who will not want anything tamper with the fragile peace being enjoyed in the State Capital hence the decision to shelve the visit so as not to clash with the “thugs” sent to attack him during the visit.

Mr. Bagos said his advocacies have been focusing on good governance, transparency, respect for rule of law and purposeful leadership that is people-oriented.

Bagos frowned at the way the PLASIEC Office was barricaded by security which caused serious traffic just because of his planned peaceful visit.

He said it will be uncharitable for PLASIEC to postpone the elections after people have spent their financial, human and time resources in campaigning. He said PLASIEC is yet to display names of voters which ought to be done before now as stipulated by the electoral act and constitutional provisions.

He said PLASIEC activities are shrewd in secrecy as ADHOC staff to conduct elections have not been trained and so many questions that require answers and clarifications needed to be pushed to the State electoral umpire.

Bagos opined that as a progressive youth, he will never do anything that will breach peace.

Bagos further said PLASIEC must come out and speak to the people with all sense of truth, honesty and responsibility so that they are not completely left in the dark of happening. He called on the youth not allow themselves to be used for selfish reasons by other people while saying people should disregard saying his visit is on behalf of G-17 as it is a personal visit which shouldn’t be politicized.

In his words “I remain a progressive youth, who is concerned about the peace, progress and development of Plateau State and Nigeria at large” “I am taken aback that people were mobilized through text messages to counter my well-intentioned and constructive visit to PLASIEC that will help them to deal with sensitive issues being circulated”
“I will never do anything that will put the Peace of Plateau State and its citizens to jeopardy rather I will engage in things that will promote Peace and unity” he concluded. 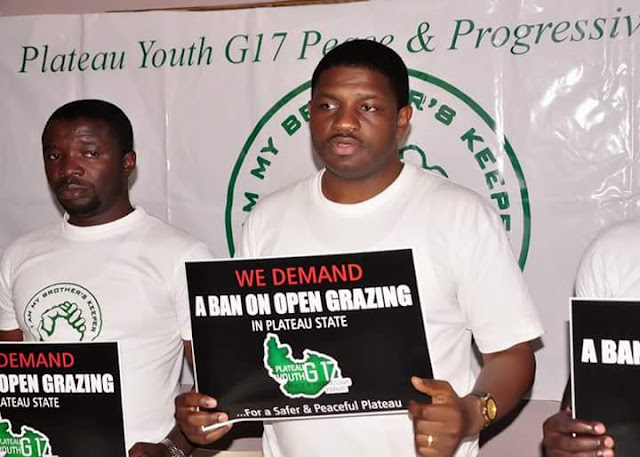 Posted by Masara Kim at February 01, 2018
Email ThisBlogThis!Share to TwitterShare to FacebookShare to Pinterest