There is a suspected case of "monkey pox" in Plateau State, the Nigerian Red Cross Society has alarmed.

The case was first reported to the Plateau State Branch office of the NRCS yesterday, Monday 14th May, 2018, the branch Secretary, Manasseh Panpe reported.

The affected person according to the communication is presently on treatment at Bingham University Teaching Hospital popularly called Jankwano.

However, "It is still a suspected case," he said.

According to the Commissioner, blood samples of the suspected patient have been sent to Abuja for examination to confirm whether or not it is monkeypox.

"The results of the lab tests are still being awaited," Dr. Kuden said.

He therefore stressed that there is no need for panic as all necessary measures have been putbin place by the state government to contain any likely spread.

On September 2017, WHO was notified of a suspected outbreak of human monkeypox in Bayelsa State.

Laboratory investigations according to a December 2017 publication on the WHO website had been conducted by the Nigeria Centre for Disease Control (NCDC) National Reference Laboratory, Institut Pasteur de Dakar and the WHO Collaborating Center for orthopoxviruses, the United States Centers for Disease Control and Prevention (US CDC) in Atlanta.

From 4 September through 9 December, 172 suspected and 61 confirmed cases were reported in different parts of the country.

Monkeypox according to Wikepedia is an infectious disease caused by the monkeypox virus.
Symptoms begin with fever, headache, muscle pains, swollen lymph nodes, and feeling tired.
This is then followed by a rash that forms blisters and crusts over.
The time from exposure to onset of symptoms is around 10 days.
The duration of symptoms is typically 2 to 5 weeks. 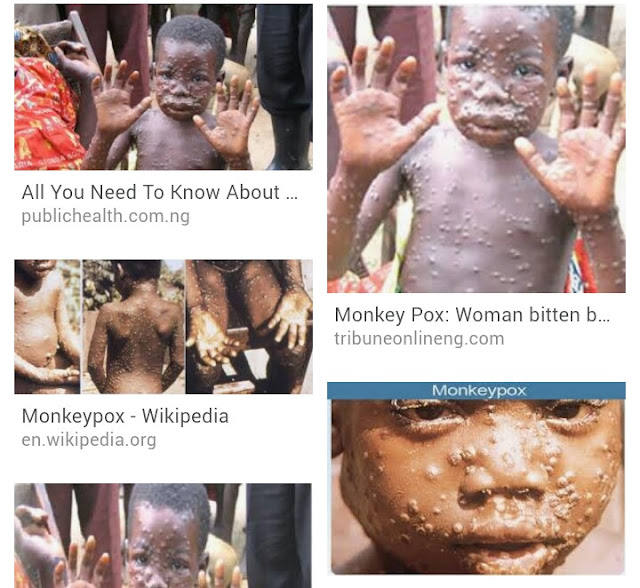 Posted by Masara Kim at May 14, 2018
Email ThisBlogThis!Share to TwitterShare to FacebookShare to Pinterest