The letter reads in detail:

MATTER OF URGENCY ON THREAT TO HUMAN LIFE AND HEALTH !!!
REQUEST FOR FINANCIAL ASSISTANCE IN A TUNE OF #400,000 TO SETTLE MEDICAL BILLS OF ANGEL YUSUF AND SAMSON YUSUF (VICTIMS OF RECENT ATTACK) ON RAKOK VILLAGE OF BARKIN LADI LGA

Following an armed attack meted out on Rakok village of Ropp District in Barkin Ladi LGA by suspected armed Fulani herdsmen on 13th day of March, 2019 as a result of which two children namely Samson Yusuf Nuhu and Angel Yusuf Nuhu aged 9 and 7 respectively were severely injured and rushed to Barkin Ladi General Hospital and afterward transferred to Jos University Teaching Hospital (JUTH) where they are presently on admission, Emancipation Centre for Crisis Victims in Nigeria (hereinafter referred to as ECCVN/Centre) hereby writes imploring your rapt intervention through financial assistance to enable the family not only offsetting all pending hospital bills incurred, but also payment of other medical treatments on the two children especially Angel Yusuf who is about undergoing surgery arising from bullets of gunshots unleashed on him on that gloomy day.

A prompt response to this pressing call for assistance in a sum of #400,000 (Four Hundred Thousand Naira only) will greatly consolidate on your usual humanitarian intervention programs objectively outlined in bringing succor to victims of humanitarian crisis at this juncture that they are in dire need of medical attention for sustenance of right to life and enjoyment of same pending when anticipated intervention for their total liberation is deliberately brought to lamplight.

In order to meet up the yawning of victims of armed violence within your area of obligation as statutorily required, the Centre is impelled to implore for not only your intervention in the pending case, but also seek collaborative partnership of your good offices to offer psycho-social services to all affected persons who ought to have been similarly attended and giving a humane treatment/attention as members of human family. Interestingly, it is pertinent to bring to your notice that ECCVN will be enormously elated to be intimated on every level of your step-up response which forms part of its co-values.

It is equally our intention that the family members by name Mr. Yusuf Nuhu, the father of the victims and/or their grand-mother, Ngo Chundung Nuhu to be directly linked up through 081-45-2803-03 and 081-68-9061-92 respectively for more inquiry/confirmation.

Sir, it will serve the interest of humanity if this pressing call for your intervention is given a rapt consideration in view of the circumstance.

Attached hereto are pictures and few of many receipts of some of the medical bills of the promising victims for your information. 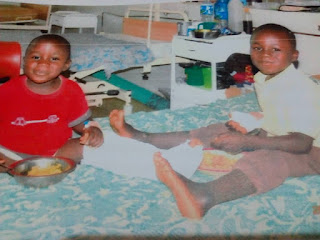 Posted by Masara Kim at April 04, 2019
Email ThisBlogThis!Share to TwitterShare to FacebookShare to Pinterest
Tags Health