Bullet pierces liver of 20year-old, yet he survived 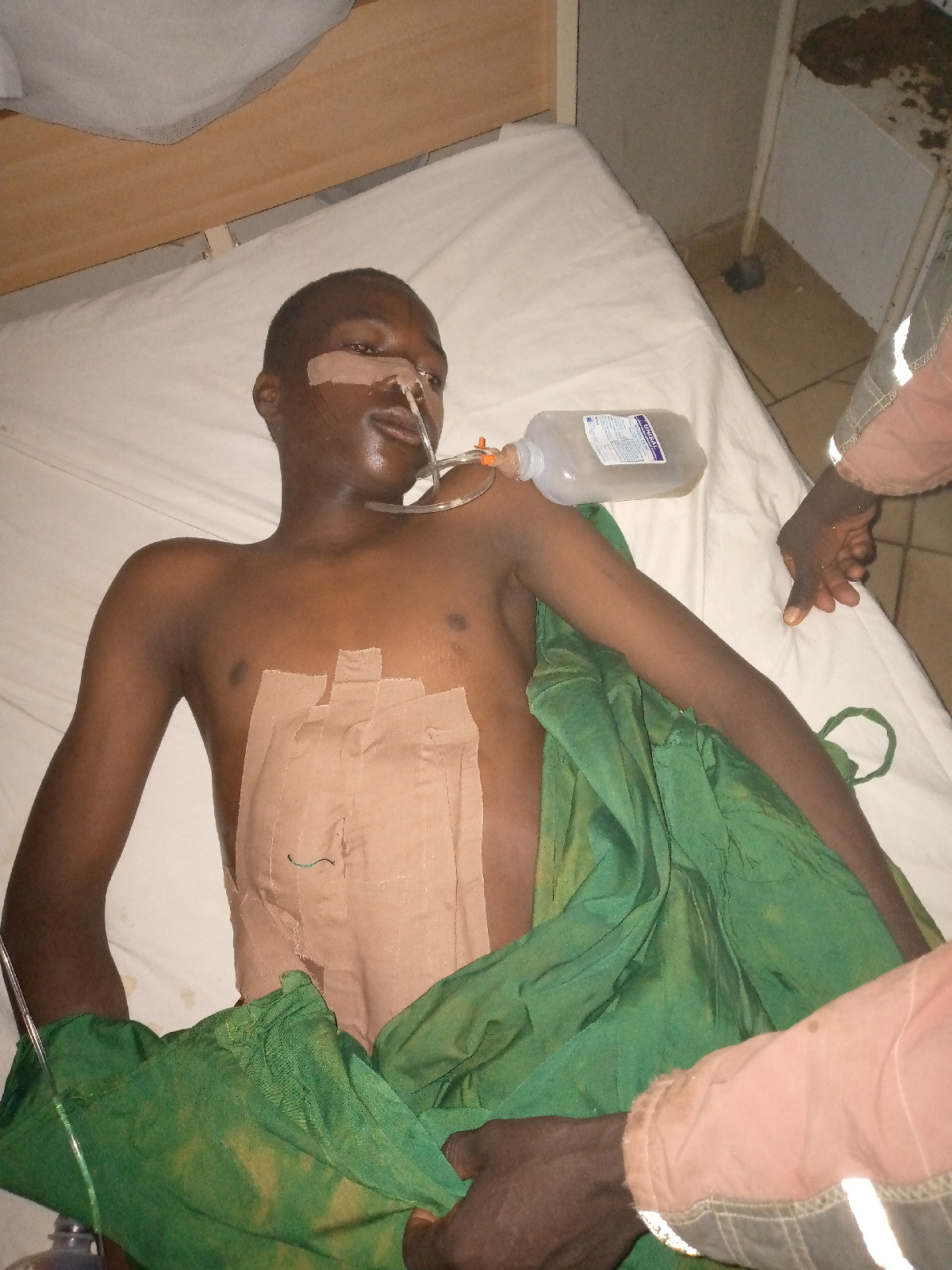 Central Nigeria: He was targeted for elimination. A 7.62X39mm diameter AK-47 bullet, fired from less than 50meters range, pierced his back, bursting out through his stomach, about 15cm above his navel, damaging vital organs, his liver included.

Suleiman Abdulhameed, 20, was unfortunate, being caught in an attack he never provoked. The assailants, yet to be identified, meant to conceal his supposed dead body, but some two young men, believed to be natives of Kumm Hamlet, a farming Community in Riyom Local Government Area of Plateau State dragged and hid him in tall grass before government securities arrived.

The attackers were said to have been seen trailing their victim’s blood stains, likely to find, finish in case still alive, and dispose off the body to rid traces. But Securities arrived quickly, warded them off, and took the near lifeless herder in the pool of his blood to the hospital in Jos, the capital of Plateau State.

Suleiman, a native of Tafawa Balewa Community in Bauchi State was meant to inherit some of his father’s cattle. However, he left home last month to find his own wealth. He accepted a herding job for a yearly reward of a cattle in Plateau, from fellow herders in Riyom. His brother is a University lecturer, but Suleiman never went to school. His hope was however to acquire enough cattle through his new job, marry and train his kids in school.

His Master’s previous employees were arrested and fined several times for various crimes including malicious damage to property and assault. Once, they were accused of murder. Their Master, tired of their frequent troubles, sacked and replaced them with the young Suleiman who was confirmed to be peaceful, hard-working and law abiding.

Suleiman took over the herding business of his master and never had any case of indiscriminate grazing or even quarrels with anyone. He barely even knows the community, aside from Fass village, where he lives with his employer.

Each day he goes out, he makes sure to feed the cattle well and brings them home in good time. Last Sunday, he was out as usual, herding his cattle to areas with good pastures, never allowing any cow to stray into anyone’s farm. It was yet dusk; he herded the cattle to a small stream to drink at about 3pm, local time, but just as they were drinking, a man popped out of the bushes with a rifle.

“Those who were there told us he attempted to run, and they (Gunmen) threatened to kill him if he ran but he still turned to run and they shot him,” his employer told MK Reporters.

Afraid of a possible counter-fire, the gunmen instantly went into hiding, and people working in a nearby farm who had laid in the shrubs on sighting them, dragged and hid the now profusely bleeding victim before making emergency call.

Doctors at the Jos University Teaching Hospital managed to control the bleeding and sustain his then faint, irregular pulses but fear the damaged organs might be life-threatening. “He’s going to need a series of highly specialized surgeries to survive this, but it’s a very risky and expensive procedure,” said a Medic.

His employer currently caring for him has spent over $200USD on treatment, and might have just begun spending. His herd only has 40 cattle, and he risks losing them all, on his new servant’s medical bills. He is however afraid to tell Suleiman’s parents about the incident.

“I only told the father to come that he is sick. I can’t tell him this is what has happened yet. He could go crazy. His son just left he recently to find a means to survive and now is on the verge of dying?” He said.

But perhaps, his biggest worry is that the assailants might still be living freely, and could return, if not for the already attacked victim, for another, regardless of tribe or religion, being “obviously hungry for blood,” said the herder.

Securities have yet to comment on the incident, but the Police and military Task Force in the State were involved in evacuating the wounded herder to hospital.

Posted by Masara Kim at November 17, 2020
Email ThisBlogThis!Share to TwitterShare to FacebookShare to Pinterest